Police Scotland’s Stuart Ward has been announced as the winner of Secured by Design’s National Building Approval Award 2020.

Secured by Design’s (SBD) National Building Approval (NBA) scheme makes it easier for companies and organisations commissioning new build developments or major refurbishment work to meet SBD’s police security standards or achieve Building Regulation compliance for security in England, Scotland and Wales, whichever is appropriate, and as such is perfect for companies like developers, builders and contractors as well as organisations like local authorities, housing associations and social landlords.

Signing-up developers to the benefits of SBD NBA can often take a considerable amount of time though, attending many meetings and giving presentations to key audiences. This is to be expected as developers and organisations commissioning building projects need to be convinced how NBA can help them.

It was thanks to the sterling efforts of Stuart, National Designing Out Crime Manager, Police Scotland, that Springfield Homes, of Scotland, became an SBD NBA member company – establishing the start of a long and mutually beneficial partnership. 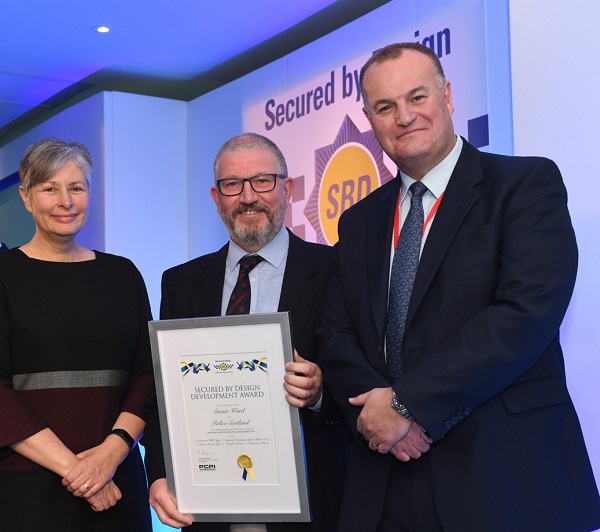 Stuart’s considerable commitment and professionalism during this process led him to being announced winner of SBD’s NBA Award at ATLAS, SBD’s national training conference for Designing Out Crime Officers (DOCOs). He was presented with his award by Stephen Watson QPM, National Police Chiefs’ Council Lead for Crime Prevention, and Helen Ball, Assistant Commissioner (Professionalism), Metropolitan Police.

Stuart also received a commendation for his services to crime prevention and designing out crime.

Springfield Homes has two offices: one at Larbert (Falkirk), which is mid-way between Edinburgh and Glasgow and the other at Elgin to the east of Inverness.

Stuart was approached by their Elgin office and informed that they intended to build a significant number of homes for social housing within their developments to SBD security standards.

After many discussions, meetings and presentations, Stuart talked them through the process and they decided to become members.

Having signed up the Elgin Office, the team at Larbert, 170 miles by road to the south, were won over too and are now in the process of utilising the NBA scheme for their future developments.

During the early stages of each of the developments, further discussions took place to advise on the measures needed to go beyond SBD’s Silver Award for physical security, such as robust doors, windows and locks, and achieve the SBD Gold Award, which additionally introduces the external environment including the surrounding layout and landscaping to maximise natural surveillance, create defensible space and limit excessive through movement.

These measures combine to create a difficult environment for criminals to operate by making it more difficult to break in quickly and noiselessly, to increase their chances of being seen and to minimise escape routes and hiding places.

As Springfield’s developments were completed, inspections took place and each was found to have achieved the Gold Award standard.

Springfield’s design and contracts team decided that the most appropriate progression for the various developments to achieve SBD’s Gold Award would be through membership of SBD NBA.

Springfield Homes has been very receptive to the proposals and recommendations to meet the Gold Award and continuous dialogue with the developer throughout the life of each development has been, and is being, maintained.

The number of homes to date is around 80 and rising steadily. There have been no recorded crimes on the Elgin developments up to October 2019.

Over the last 30 years, more than one million new homes have been built throughout the UK to SBD’s crime prevention standards with reductions in crime of up to 87% in the lifetime of the development bringing huge benefits to residents who are living in safer communities and for hard-pressed police forces which can concentrate resources elsewhere.

On receiving his award, Stuart said: “I was surprised and delighted to receive this award and a commendation. I am pleased to say there is now a Divisional DOCO working in this area where there wasn’t before.”

Police Scotland Assistant Chief Constable Gary Ritchie, (Partnerships, Prevention and Community Wellbeing) said: “This was an excellent piece of work by Stuart, who is widely recognised by his colleagues for his drive and commitment to reduce crime and enthusiasm to help build safer communities.

“As a result of Stuart’s work there are more safe and secure homes being built in Scotland, a development which will not only be appreciated by the residents moving into them, but also by Police Scotland too.”